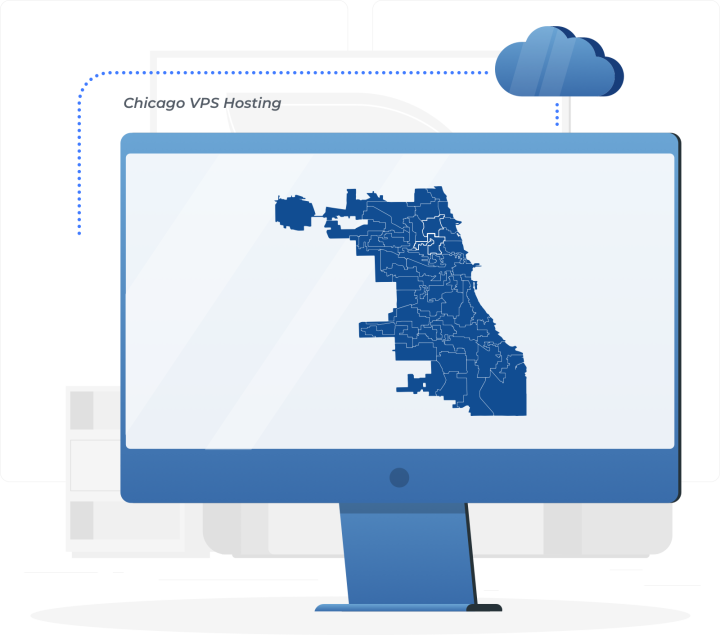 Chicago BlueVPS Features
Get the best features from the best web VPS hosting provider. After all, offering the cheapest web hosting with distinctive features is our #1 priority.

DDoS protection
Feeling that your business might be under attack from your competitors? Get VPS in Germany, France, Canada, Australia, or Singapore and protect yourself from those pesky bots.
Explore more features

Chicago, Chicago that toddling town as sang by Frank Sinatra. BlueVPS is offering an outstanding deal to buy VPS in Chicago. Topped by the best hardware from industry-leading manufacturers like Dell, Hewlett Packard, and Supermicro, BlueVPS offers an incredible price to quality ratio for virtual servers in Illinois.

If you've ever tried running VirtualBox on a computer, the principle is almost the same. The only difference with a virtual private server is that it runs on a dedicated server in a data center. That means you can run your software as a root admin without affecting root on other virtual servers. Virtual servers are often called private servers because they are private even though there are many roots on one VPS node.

We offer great benefits for hosting with us:

Due to the pandemic, there is an increasing demand for virtual desktops, virtual offices, and other ‘virtual’ which Windows handles quite well thanks to its accessibility for most of the users. Let’s face it, not so many accountants tend to use Linux in order to make their calculations, isn’t it? We offer such OS:

One of the main reasons why you should use Linux is because it's free. Don't think you're not paying for the operating system you're using now. Because you need to know that when you buy a desktop or laptop computer device, there is a fee included in the price to buy a Windows license that is already installed. Not only that, if you've ever upgraded Windows, you know there are additional costs for this. The inherent costs are not only found in the operating system but there are many applications for Windows or macOS that have associated costs.

It's different when you use Linux, Linux is completely free and you will find thousands of applications are also free. Instead of paying for MS Office, you can install LibreOffice on Linux or Open Office, directly from your distribution's app store. Looking for a free Photoshop alternative? Try GIMP. And when it comes time to upgrade your Linux distribution, it won't cost you a dime... ever.

We offer different versions of such OS to be installed:

What are you waiting for? Go choose the favorite configuration, click on to proceed, choose additional gimmicks and create your online presence in Chicago. If you wish to pick up some other location in other countries then we can offer VPS in Los Angeles or VPS in Atlanta. Our team is available 24/7/365 through LiveChat.