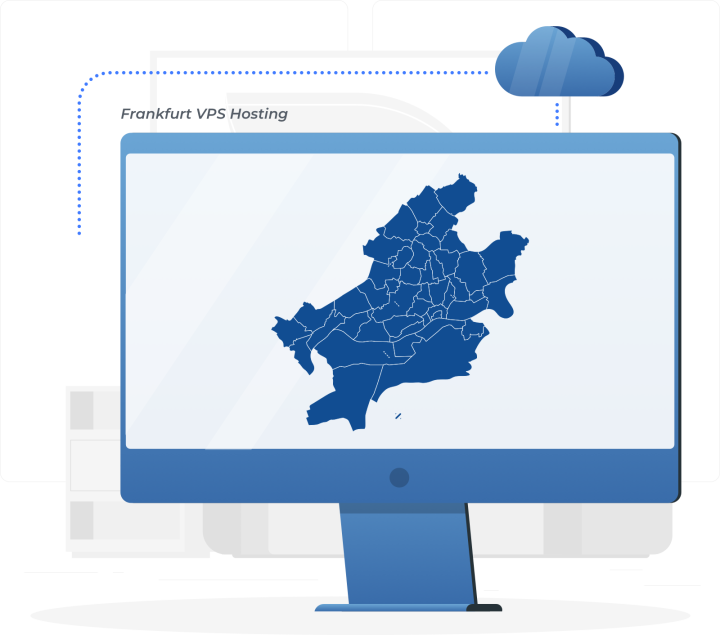 Frankfurt BlueVPS Features
Get the best features from the best web VPS hosting provider. After all, offering the cheapest web hosting with distinctive features is our #1 priority.

AMD EPYC Zen2/Zen3 processors
Powerful through the roof, the new AMD EPYC Processors will chew on every task you give them.

The German market is quite big and every company that wants to host there should choose a reliable provider. BlueVPS is offering a stable and robust infrastructure to start your business in Frankfurt. Buy VPS in Frankfurt and get a significant presence on the german audience with low latency and fast SSDs.

The entire Internet is, in essence, nothing more than a massive collection of interconnected servers. To do anything online, such as start a website or run a service like a scheduler or tracker of something, you must run a program or host files on a server. No server, no site.

However, the fact is that servers are large, powerful machines that are expensive to buy and maintain. As a result, most servers are owned by large companies for their own use or web hosting providers lease them to smaller companies. These are companies that own and operate servers for this specific purpose.

However, if every person who wanted to build a site had to buy or rent an entire server, they would be out of business before they started, and the Internet would be a much less diverse place. This is where virtualization comes in: instead of having to buy or rent an entire server for every site or online service, individuals and small businesses can rent a fraction of a server from a web host.

The great thing about a VPS is that, to extend our analogy above, you not only get a slice of the computing pie, but you can decide how big the slice is. As a result, it is a very flexible solution for companies that want to grow online and want their hosting to grow with them.

On top of that, VPS is also great because it gives users a lot of control over how they want to use the resources they have as if they had their own server while paying only a fraction of what a full machine would cost.

So what do we offer? We outline the most important benefits:

Whenever your project is built on .NET or any other Windows supported language you require a Windows VPS to run it or maybe you want to set up a remote desktop. Here is where Windows will shine. Here we offer such OS to be installed:

Linux is secure and follows the philosophy of Unix systems; its robust system of permissions and users does not allow users to delete or install programs or touch system files. This can only be done by the root, who is the only one who has the proper permissions to do so. On a personal computer the root and the user are usually the same people, but in Linux different user accounts are used for each profile. This way you will not have the same problems that occur, for example, in Windows, which lets you delete, for example, the folder 'Program Files' or the files: User.dat or System.dat, at which point the computer will stop working and you will have to install all your programs again, in addition to Windows itself.

We offer different versions of such OS to be installed:

As you can see buying VPS in Frankfurt is very beneficial to your business. So what are you waiting for? Just choose the suitable configuration and proceed through the checkout. We’ll be glad to start working with you. If you wish to pick up some other location in other countries then we can offer VPS in Dusseldorf or VPS in Spain. Our team is available 24/7/365 through LiveChat.